I’ve just finished two books, actually two romance novels I bought this morning. One of them was written by a Vietnamese writer – Phan Anh and its name is “Bởi vì ta thuộc về nhau” — “Because we belong together”. The other was written by a Chinese writer – Tien Chanh, “Bản sắc thục nữ” — “Girl’s identity”, which was translated to Vietnamese (sadly, I can’t read Chinese!!). Both of them gave me many emotions, therefore, I can’t sleep and must log in to write this entry, or I’ll stay awake all night .

Truthfully, there are not the greatest romance novels, but somehow, it gives me some special impressions and I can’t explain it by myself. I’ll talk about them separately. Start with Phan Anh’s novel – “Because we belong together”.

There are four main characters in this novel, two men and two women. Three of them are doctors, with different specialized.

At first, a woman and a man in there is a couple and they have a happy relationship. She – Thảo – is a student who is finishing her last year at university. He – Phan – is a doctor who is an adviser for HIV/AIDS patients.

The other man – Việt – is a successful businessman and a CEO of a hospital. He’s a player, who changes his girlfriend is quicker than changes his clothes. Two men are best friends for a long time, they understand each other without saying a word.

The other woman – Hạnh, she’s a doctor but there was an incident and she has AIDS virus in her body, which made her world turn upside down and to make it worse, her long term boyfriend broke up with him right after he knew what happened to her. That’s why she met two men and be friend with three of them.

The novel is a story about four young adults find their ways, their love in this big world. They all know their lives aren’t a smooth way, it’s not a simple life. With Phan and Thảo – they have their families between their relationship. With Việt and Hạnh – the worst disease is the most difficult thing in their relationship. All of them have suffered many things before they can find each other and realize, it’s not a problem anymore, it’s just simply as foam in the ocean, they just belong together.

A gently story, with gently words, we can see their life, can feel their hurts, at the same time, their love.

The other novel is “Girl’s identity”. (I don’t know their Chinese names, that’s why I’ll use Vietnamese names from now on ^^)

There are three main characters in this novel. Three girls with three different personalities, three lives, three circumstances but they have a similar thing – deep down inside, they all want to find a man to rely on, to coddle and be themselves.

Their man appear at the most unexpected time and they are different from the girl’s imagination. However, they are fitted for each other at the best way a girl can know.

The first girl – Tĩnh Chi – is good girl at the first glance. However, when you are getting to know her, you’ll know that’s all her act. It’s not her intention, it’s just her natural to be a good girl. She’s also an indecisive girl, that’s why she almost lost her true man at the first and the end. She’s just hard to listen her heart to know, to understand what/who she wants and what/who she really needs – loves. Sometimes, the man in your dream isn’t the man you love and need/live with him all the rest of your life.

The second girl – Tiêu Tiêu – is kinda a dissipated girl. She’s a good-looking girl, with a model figure, knows how to flirt with men, very good at her job and an independent type. But, no one is perfect. She has a big wound in her heart, her soul and she doesn’t believe in love, she doesn’t believe the love of men can last forever. Knowing what you need and want is a good thing in your life. However, sometimes, trusting your instinct is a good thing to do.

The third and the last – Sở Dương – is a special girl. She’s very different from the other two. She’s the tomboy type, doesn’t care about girly thing and doesn’t have a girly look. But, she likes Tiêu Tiêu, in her heart and her soul, there was a scar she couldn’t forget. She really doesn’t know what she wants, what she needs, unlike her cousin and her cousin’s friend, they know what they want and need, but they are too stubborn to admit it. Sở Dương, she doesn’t know what she wants and needs. That’s why she needs to go far, far away to grown up, to understand her feelings, her heart and her soul.

At the end, Tĩnh Chi can face her non-perfect personality and being honestly with her feelings to keep her man – Uông Dụ Hàm. Tiêu Tiêu finally learned how to trust people and believe in her man’s love – Tưởng Tư Thừa. Sở Dương can return from a far far place to tell Phương Nghị that this is her home, her home is where she’s with him.

Somehow, I found myself in all of them – a little “good girl” in Tĩnh Chi, a non-believer in love like Tiêu Tiêu, unsure about my feelings like Sở Dương – and I believe that every girl can find themselves in these girls.

That’s all about two romance novels I read today (technically, yesterday), but the feeling led me to stay awake at this time after a long day is my confusion. Yes, I confused. I believe love is all about the chemical reactions in our brain and there’s no one in this world do anything for anyone without waiting for something back. Yeah, there are some people think that I’m cruel, I disgrace love, etc but it’s just the way I think. I can’t change it.

However, I can’t understand myself. I don’t believe in love, in men but I keep reading romance novels and adoring their love. Maybe, as my friend said, I like them because they’re unreal, you don’t and can’t see the bad part of them. But love in a real life, I know it, I understand and I see it, I even tried it, that’s why I can’t dream of them like romance novels

Well, maybe this can help me sleep tonight. Talking about good novels could be a good experiences, maybe I’ll try it sometimes ^^ 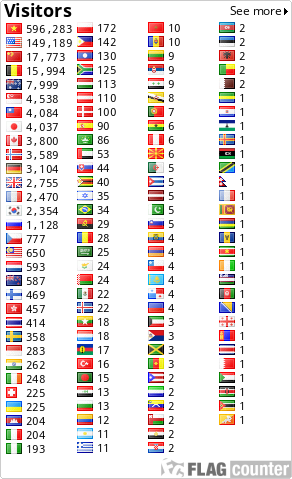 Get Your Own Real Time Visitor Map!